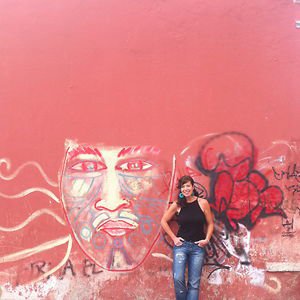 I revel in chasing down stories and meeting intriguing people around the globe. I’ve interviewed brilliant people on five continents—from political leaders to trafficked youth. I’ve ridden an elephant, run through a favela, and hiked a 15,000-foot mountain in a blizzard to get to them. I’ve yet to regret a pursuit.

I discovered early on that it’s often the overlooked people who are most chase-worthy. A story resides in us all.

I stumbled upon this idea as a child. You could say my growing-up years lacked that Modern Family normalcy. My childhood cast of characters included ex-cons, teen moms, and TV evangelists. Throw in a guy coming off of heroin in our basement, a photo shoot with Colonel Sanders, and a parade with Mr. T. and you’ve begun to get the picture.

After my curiosity came of age, I’ve had the fortune to trek from Mozambique to Morocco, learning from African leaders for Halogen TV’s original series Noble Exchange: Africa. I took rising musicians, models, and actors on a journey of discovery and service for Noble Exchange: Latin America. I spent a year and a half interviewing survivors of sex-trafficking and modern-day abolitionists in the U.S. and Southeast Asia for the TV series Tainted Love. I’ve written articles in Jerusalem, scripted children’s videos in Brussels, and sallied through the Balkans and Middle East to author the travel memoir Sacred Encounters from Rome to Jerusalem (InterVarsity Press, 2008).

Recently I’ve focused my efforts on two major issues of our day: the rise of refugees and the changes in Cuba. I traveled to the Middle East and Europe to interview and produce short stories on Syrian and Iraqi refugees. (These videos were produced for a US-based NGO for the purpose of building compassion for the refugees.) I also have spent time in Cuba researching, interviewing and directing a documentary short-form series that explores the Cuban spirit of creativity, innovation and entrepreneurship. (It’s currently in production.)

And…I’m exploring the idea of wonder around the world. I suspect it may be the most needed commodity of our age.